Kawaii would have been quite happy if we had never gotten a dog.  She spent the first three days as often under the bed as anywhere else.  I think she pooped only when Riley was in his crate.  She was not ok with this change.  Granted, she doesn’t much care for change.  It definitely is taking her the longest to adjust to having a dog in the house.

Genkii on the other hand follows Riley around.  A Lot.  He has tried to steal Riley’s food.  He has sniffed Riley’s crate.  He cries when Riley goes outside without him…. even in the rain.  Genkii has always thought he’s a dog and he doesn’t quite understand why the real-dog gets different (better?) stuff.  You know, Genkii’s higher-fat kitten food (which is higher fat than adult food) just isn’t as good as the low-fat/high-protein dog food.  Fortunately, Riley doesn’t get bothered by any of these antics but has finally starting sniffing Genkii’s butt- to the cat’s great confusion.

Riley as the best success is happy.  We were told he came from abuse, but honestly – I expect he’ll never remember it in a year.  So far the worst moment has been at the vet’s office.  I don’t know what happened to him before, but when he saw the vet’s stethoscope he kinda freaked out (cowering behind me and growling at the vet).  He did not want to have that thing near him.  I ended up having to put a muzzle on him so we could give him his influenza vaccine (since we are in high-social-time right now to get him used to meeting new people & animals).  Now, the fact that he cowered against me and allowed me (without any fuss at all) to put the muzzle on was actually fairly positive.  The vet said she thinks he’s bonded well and now we just need to teach him that vet visits will be positive experiences for him.

I am wondering/thinking that eventually we might do Genkii+Riley vet visits.  ‘Cause Genkii is a freakin’ CHAMP at the vet.  Vets LOVE my cat.  He doesn’t know what “bad touch” means so they can examine paws, nose, teeth, ears and whatever else and he just wants to look around.  The biggest problem I have with him is he keeps trying to get to the kennel area so he can meet the doggies.  I’m not sure Riley is paying enough attention to Genkii yet, but he’s beginning to.  We’ll do Petsmart a few times and see if they can learn from each other (Genkii could learn better leash manners from Riley).

So we have 3 animals who are finally willing to be in the same room with each other – and this exemplifies them perfectly.  Riley is unaware; Genkii is trying to be just like the doggy, and Kawaii isn’t sure if any of this is ok – but damnit she wants to be here. 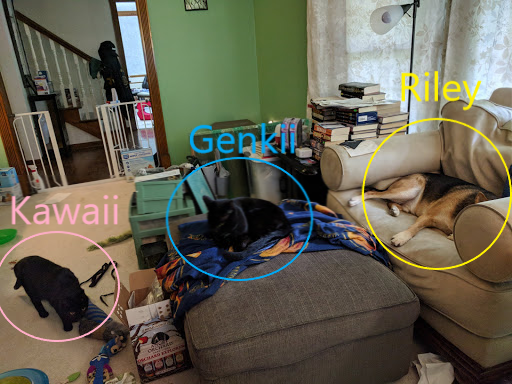