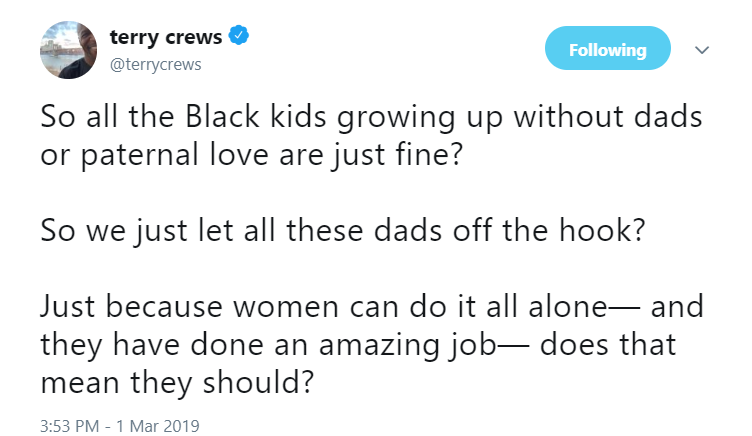 This started flipping up every once in awhile on my screens late last week and at first I thought it was a one-and-done-gone-too-fast-to-even-consider kind of thing (you know, everything Trump these days). But it just kept popping up all weekend and I finally sat down and did some reading. And I have 2 thoughts on this. The Platform Problem and the Daddy Dilema.

I’m still a little confused on the actual timeline here. There are 2 messages Crews is being called out on. (I’m posting them in the order he posted them over the past ~weekish)

Let me start with – this is part of why I kind of hate Twitter. part. You know, not counting the rampant abuse/doxxing they have never quite addressed or the allowance to liars and bigots to spew false crap and downright propoganda all over the internet.

No. Twitter’s limitation on speech by characters means people try to condense complex conversations into 280 characters. This isn’t the first example I’ve seen where I read something and considered that maybe a context could have easily been lost simply due to someone trying to condense their message.

My brother has a phrase:

My Politics doesn’t fit on a bumper sticker

The same can be said of Twitter (in my world). The reason I use twitter as little as I do is that I struggle with fitting a message into such a tiny bit. Sharing pictures or articles – sure. But getting into my thoughts? Whew, that context thing is so important how do you spell it out!

I’m sorry, I really just wanted to keep up with my alliteration on naming my sections. Good thing this isn’t Twitter! I can explain what I mean!

Terry Crews is being accused of dismissing or diminishing the love and support of single parents and same-sex parents. And reading through his responses to other tweets – I have no idea where he stands.
(Shocking news break! I don’t have ESP to know what someone else is thinking!) I have been pondering where I stand.

Let me begin by setting some of my context (and privilege in this case). My parents have been married to each other for over 40 years. I grew up in a house with a relatively traditional parental structure. So when I ponder single-parent homes and same-sex homes, I am well outside my own experience. I acknowledge that this means my perspective may be very incomplete and narrow.

If I was going to try to fit this in a tweet, it would probably sum up this way:

Some of my most influential “parental” figures in my life, weren’t always my parents.

Both in good and bad examples of being an adult. Being a good parent. Being a good community member. Being a good friend…. my parents struggled with some of these. And it helped me to see them struggle sometimes. Where they expressed weakness and frustration (or jealousy of someone who did it better), I looked to those people and tried to learn from them as well.

I don’t feel comfortable hosting friends for dinner parties. It’s not something my parents did when I was kid. When my mother was a pastor almost all the “dinner party” type events were church-wide and held at the church. Not at home. Decorating/cleaning the house in preparation of such a party wasn’t something I observed in my parents. It wasn’t something I ever heard either of them express the least interest in doing. So I have had to learn these skills from friends’ parents. From my husband and his parents. Because I do want to know how to do that!

Whether adopted or blood or missing…. I do think having healthy role models is important. I don’t think gender is necessarily a requirement. But if you aren’t getting the role model(s) you need from your adopted or birth parents – or you only have one parent and you need to see other options – I do think role models are important.

There was a man in my church growing up, Mike. He was one of the most gentle, generous, and gregarious people I have ever met. He was a pillar in the church – in the middle of everything and knew everyone. He wasn’t my father, but I do think of his example as a male role model I wouldn’t mind my son reflecting. I hope he has a man in his life like Mike.

My choir director at church, Dan, was almost an opposite. He was extremely focused on the music ministry and I don’t remember seeing him ever help on something that wasn’t music related. But he was amazing with music. He had a gift with kids, teens, and adults alike to bring out the best music they had. He wasn’t “nice” about it all the time -but for all the harshness he may have portrayed – I never felt he was personal or mean. He was demanding, exacting, perfectionist. Again, I hope my son sees someone with that talent and focus to emulate.

All of this is in contrast to my own father who was quiet, supportive, one of those guys who sat in the back of the room and made sure everything just worked when he was helping out. He made sure the dishes got done. He stepped in an helped pick up chairs to lay them out. He would sit and listen to someone as long as they needed him without judgement.

All of these men were in some way “paternal” images to me. Only one of them is related to me either by blood or choice. Dan and Mike both made points to be involved with youth in the church. Both of them were the kind of men a teenager could look to if they needed a male role model outside their own family.

I’m not going to detail the women who influenced me outside my own mother. My best friend growing up – her mother jokes I’m her “other daughter” and she taught me a lot about being a woman in a man’s world (she’s a doctor). My mother was just learning that fight when she went into the church as a pastor (when I was in high school), but Gundy had been dealing with it for decades.

I won’t say these were “replacement parents” by any stretch. But at least Gundy – if I had ever needed to call someone at 2am because I was drunk and scared…. I have no doubt she would (a) pick me up and (b) scold the shit out of me as well as my own parents would have.

Having written out context and explored this a little, I might be able to summarize my thoughts. It isn’t original, but I think it’s true:

It takes a village to raise a child.