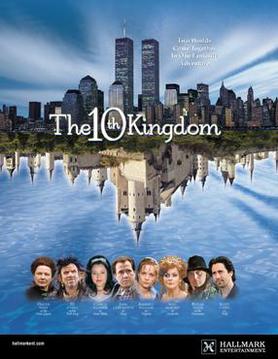 This is one of my favorite books and mini-series. The show isn’t exactly like the book, but it does a very close job of it. I probably watch this once a year (maybe every 10 months) and I’ve read the book an average of every 16 months since the first time I read it. If you haven’t read this book – you need to. Not you should. You need to. You’ll never see fairy tales the same way, and it is beautiful for it.

Synopsis: I’m not going to take anything from anywhere, so I hope I do it justice: Virginia is your average young waitress living with her father and struggling to keep it all together. Until the day that Prince Wendell, the grandson of Sleeping Beauty and cursed by his wicked stepmother into the body of a dog, crashes in Virginia on her way to work. So begins the journey, the high jinks, and the discovery of the truth behind the fairy tales with Virginia, her father Tony, Prince Wendell as a dog, and Wolf, who may be working for the evil queen.

Favorite Scene: There are so many, but only one that I can think of always makes me stop whatever else I might be doing and watch. It is the definition of consent: Virginia tries use Wolf’s attraction to her to get back a magical item she’s addicted to. He tells her no because as much as he wants her; he knows that isn’t her – it’s the addiction talking. He wants her when she isn’t under the influence – and it’s one of the sexiest things I’ve ever heard out of a male character.

It’s hard to talk about this one without spoilers, but I am going to try. I think part of the reason I like to come back to this one is that even in it’s own “return” to classic fairy tales (where truly horrible things happen to people), it doesn’t take itself too seriously.  For almost every terrible thing that happens, there is a humorous twist. As a Poe and classic-Grimms fan, I love the occasionally macabre slant on the tales.

One of the parts of the book and movie that was hardest for me to digest in my most recent consumption was some of the references. They are somewhat dated – which is what happens. There are few movies or books set in their own time which can hold up over the years. They exist, and sometimes these dated references actually seem to enhance the story (think of recently created period pieces – how hard it is to get those references right). That apology aside, I’m not sure all the references in the mini series held up entirely (I think the book handles it a little better).

If you enjoy fantasy, if you grew up on fairy tales and the Disney princess “happily ever after” story – read The 10th Kingdom. At least watch it. It’s an enjoyable 6 hours.